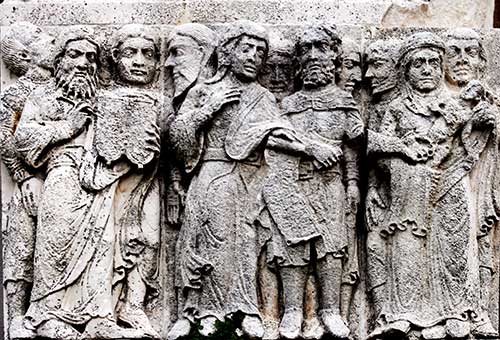 The Apostle Paul that is. He writes a third of what we call the New Testament.

I feel sorry for him. He was an activist Benjamite Jew, a Pharisee who hated Jesus and the people following him. He got permission to imprison and kill the scum.

Then he has this crazy experience and becomes an instant Jesus follower himself.

Still a Benjamite Jew, still a Pharisee, but now an avowed Jesus follower. In today’s world of anachronism, a BJPJf. I like him. Quit dissing the BJPJfs of this world.

I feel sorry for him. He’s the redheaded stepchild of the Christian world. (For all my friends that I dearly love who have red hair, you know my tongue is stuck in my cheek).

It’s cool to hate BJPJfs if you’re one of my progressive friends because enlightened hipsters would have known better than to say those things about women  2000 years ago.

Even my evangelical friends get a little embarrassed by some of the stuff that made sense when he said it, but not so much now.  They keep trying to make it relevant anyway.

Paul was a victim and I’m sticking up for him!

He tried his best to give good advice to a diverse bunch of Js, BJs, BJPs, BJPJs, JJs, Js, Gs, and GJfs. (G=Gentile:))

Big job, that one!

It finally got him killed… beheaded. That’s what you do to people who try to use their head to reason with you.

Did I mention that Paul was a victim?

You’d think he could RIP after he died.

No way. The rich and powerful wanted to control all those Bs, JS, Ps, Jfs, Gs, and combinations thereof.

So they voted on a canon they could use as a cannon to destroy anyone who disagreed with them. Then a bunch of them went so far as to say that their canon was indisputably the inerrant and infallible Word of God Himself!

Now Paul’s reputation and memory has to live with that!

He doesn’t get to be the guy who took us all forward to a higher level; instead all his words get stuck in timeless immutability.

An amazing change agent that altered the way the world thought, stuck in that reworking’s first iteration.

He’s one of the major reasons we kept changing.

The timeless things he said kept us moving forward.

Until then, try to give Paul a break. 🙂